Victorinox is best known as the producer of the famous Swiss Army knife, the world’s premier tool for the modern-day go-anywhere and do-anything adventurer. Less well-known is the fact that they also produce a wide variety of other goods, such as flashlights, cutlery, and watches — but all to the same exacting standards that govern […] 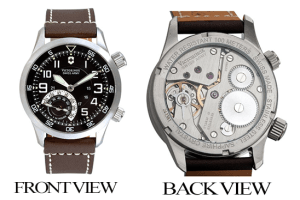 The Victorinox Swiss Army model 241381 men’s watch is a great looking watch with sleek design for both corporate and casual attires. It is a well-designed Swiss watch with a manual-winding mechanism enclosed in a solid stainless steel casing of 12.5 millimeters thickness. The classic leather strap of the watch finished with a contrast white […]

🔎 What are you looking for?

If you’ve only ever shopped for watches at brick-and-mortar retailers, the name … END_OF_DOCUMENT_TOKEN_TO_BE_REPLACED

Sometimes our watch needs to do more than just make a statement. It seems nowadays, most … END_OF_DOCUMENT_TOKEN_TO_BE_REPLACED

Taking Care of Your Wrist Watch

Wrist watches come in all shapes and sizes. Some are dressier and are more jewelry than … END_OF_DOCUMENT_TOKEN_TO_BE_REPLACED

Get To Know Us