Just the idea of avant-garde watch brand MB&F collaborating with the flamboyant jewelry house Boucheron laces the air with a tingling excitement. While Boucheron boasts over a 150-year history and MB&F scarcely half a decade, both have a reputation for harnessing wild flights of fancy into startling creations. 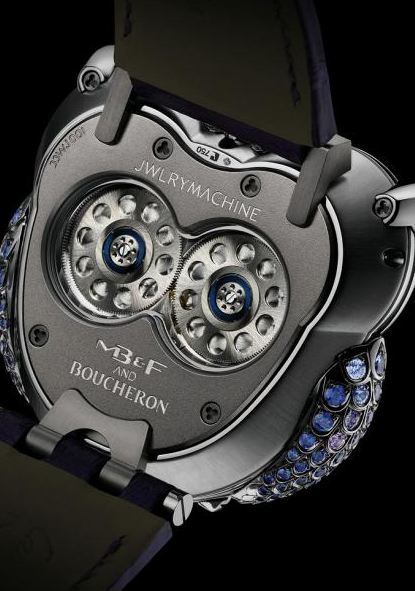 If you’re not familiar with Boucheron, you can get a sense of the philosophy that guides their aesthetic from the names of the collections, such as Bewitching and Fatal Flowers, Extravagant Beasts, and Cabinet of Curiosities. The pieces are hypnotic not only for the wildly vivid and surprising use of gemstones but also for the choice of subject matter.

It was anyone’s guess what the artisans at Boucheron would do with the third of Max Busser’s horologic machines. Launched in 2009, the HM3 literally turned the horologic world on its head by positioning the movement on the top of the watch, revealing the oscillating hula of the balance and the iconic battle-ax shaped rotor. Two cones extend up from the case, offering the hours and minutes in orientation to day or night, while a date indication that follows the swing line of the rotor completes the frame of the design. To power this unique architechture, it took sophisticated engineering and the use of high-tech ball bearings.

Boucheron transformed the futuristic time-telling module of the HM3 into the Jwlrymachine, represented by the magnificent splendor of the owl, which is as much admired for its beauty and grace as for its savage intensity. Looking at this watch is an absolutely intense experience! Love it or hate it, you will be fascinated. No matter your reaction, MB&F and Boucheron have achieved their goal of stirring your emotions.

The owl nests around the HM3 in a complex framework cast in five separate parts and composed of solid gold. Drawing from their palette of dazzling and eye-popping color, Boucheron built the image in two forms. Giving off a more mysterious and regal aura is the 18k white gold owl covered in a plumage of amethysts and diamonds twinkling amidst blue and violet sapphires.

The second owl is made from18k red gold and feathered with pink tourmaline, rose quartz, diamonds and pink sapphires. One of the most delightful features of the Jwlrymachine is the hint of the battle-ax shaped rotor swinging underneath the breast and signifying the beating heart of both bird and machine. 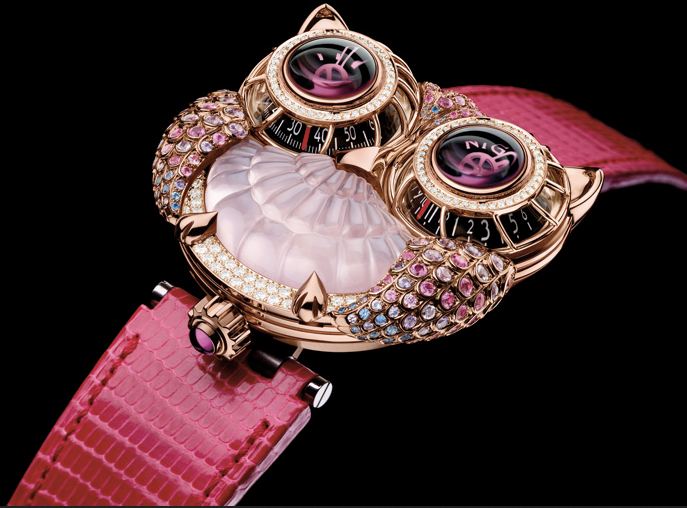 What makes this creation even more spectacular is the pool of talents required to bring the piece to life. The breast of the owl is sculpted and engraved from a single block of amethyst or rose quartz, while the rest of the stones are pavé-set.

Of course, if these two examples of the Jwlrymachines don’t meet your fancy, it can be made to order with gemstones of your choice. Prices start at $195,000. (Correction: Max tells me that due to exchange rates, after discussion with Boucheron, the price has just been increased to $215,000)

A Jwlrymachine obviously isn’t a piece you flaunt everyday, unless you’re Sarah Jessica Parker, Beyonce, Jay Z or Eminem. With their style and attitude, they could pull it off. This stunning piece of haute joaillerie and horlogerie would find a suitable habitat at the opera or symphony, walking a red carpet or at a black tie affair. Like its wily and winged friend, it will be at its best in the dark hours of the night.

I'm a watch reviewer who loves to share my insights on the latest watches from the world's top brands. I'm passionate about horology and I love to help people find the perfect watch for their unique style. Whether you're looking for a classic timepiece or something more avant-garde!

Sometimes our watch needs to do more than just make a statement. It seems nowadays, most … END_OF_DOCUMENT_TOKEN_TO_BE_REPLACED

💡 Taking Care of Your Wrist Watch

Wrist watches come in all shapes and sizes. Some are dressier and are more jewelry than … END_OF_DOCUMENT_TOKEN_TO_BE_REPLACED

If you’ve only ever shopped for watches at brick-and-mortar retailers, the name … END_OF_DOCUMENT_TOKEN_TO_BE_REPLACED